The Dow Jones briefly hit 22,000 for the first time in history. What does this mean for you and your portfolio, and what's going to happen next?

Hello, my name is Paul Carroll. I am the CEO and founder of Efficient Wealth Management, a boutique wealth management firm here in The Woodlands, Texas.

The Dow has reached a record high, 22,000, but it masks a lot of things. First, that boost was jump-started by good news coming out of Apple, and it kind of brings up the problem with single-company boosts to the index. Apple is such a large part of the index. The good news in one company has raised the tide for everybody. But Apple also reflects some of the problems we are dealing with in this economy. Apple is somewhat of a monopolist. It's an economic model that's increasingly being beset by market concentration, and it is seemingly somewhat unsustainable. What is the next iPhone for Apple?

It also brings up the problem of indexes. Indexes being the Dow Jones or certain index funds that are not modified in some way. An index is a collection of highly concentrated and specific stocks, so not only has the index itself become highly concentrated, but we have a lot of investors in the country. Maybe as much as 30% who are also in those very same pure indexes. One of the things that we believe in strongly is passive funds. All indexes are passive funds, but not necessarily pure indexes, so we don't have that concentration. Because when the market does turn, and sooner or later it will, those purely index driven investors are going to feel a lot of pain.

The dollar is losing ground as we speak. There's a moderate amount of economic data out there. Now, the dollar losing ground is basically the rest of the world voting with their money, saying, "We're beginning to lose confidence in the United States economy and the management of that economy." Now, this is good for exporters. It makes our products cheaper overseas. It's also good for investors who had the foresight to invest a portion of their portfolio in foreign equities, because now even if those equities have not gone up, their holdings have gone up in value due to the fall in the dollar. In addition to all this, the Fed is committed to raising interest rates and ending quantitative easing. This also puts a bit of a dark cloud on the horizon and hopefully they'll manage that transition as well as they've managed quantitative easing in the past few years.

But it means more money that will be taken off the table. We're looking at the end of an eight-year bull market run. In fact, I've got a table, a little chart that I've shown, that shows the bull markets through 2009 and also shows the increase in margin that's being used to feed those bull markets. We're in a market environment that has a certain 'Alice in Wonderland' quality. What we would say is, "Be careful." Don't let these new high numbers make you suffer or regret that you're not deeper in the market. It's a classic mistake at the end of a bull market. I don't know when this bull market will turn, but I know it's expensive and it's looking increasingly dangerous. Back away from the fire. Don't get burned. 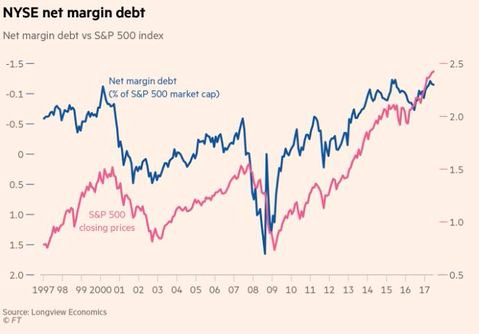 As for our clients, we've got them in well-thought-out diversified portfolios. Some of them we've actually moved back a little bit. They have nothing to worry about. We wish you the best of investing success, and if you like this video and would like more like this, please be sure to like us on the tabs below. That will enable you to follow the feed in the future. Thank you.